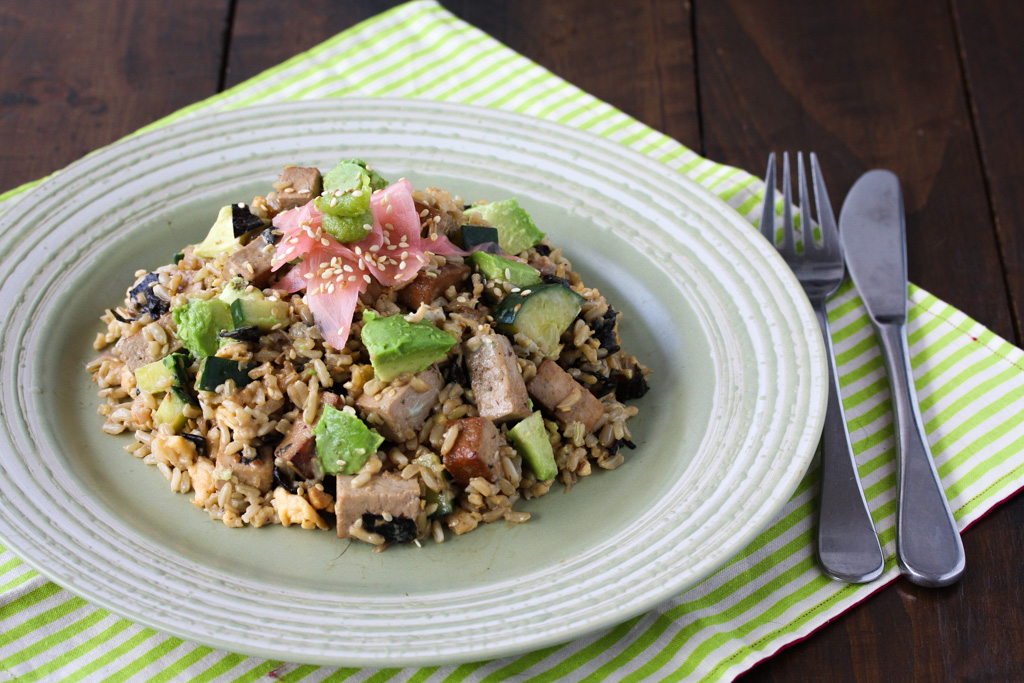 Tuesday night, as anyone even remotely near the 2-kilometre line along Spencer St would know, was the Foo Fighters concert. For me it’s the realisation of a decade-long dream! As with my Paul McCartney post, I must warn: if you're not a Foo Fighters fan, you may as well click 'Skip recipe' now.

When they toured in December 2005 I was all set for my first houseboats trip with a huge bunch of mates. I was young and invincible, and entirely confident that I would get another chance to see them.

But come late April 2008, my final year of vet, exams were approaching and I just couldn’t justify it. Insert gratuitous photo of vet boys here. 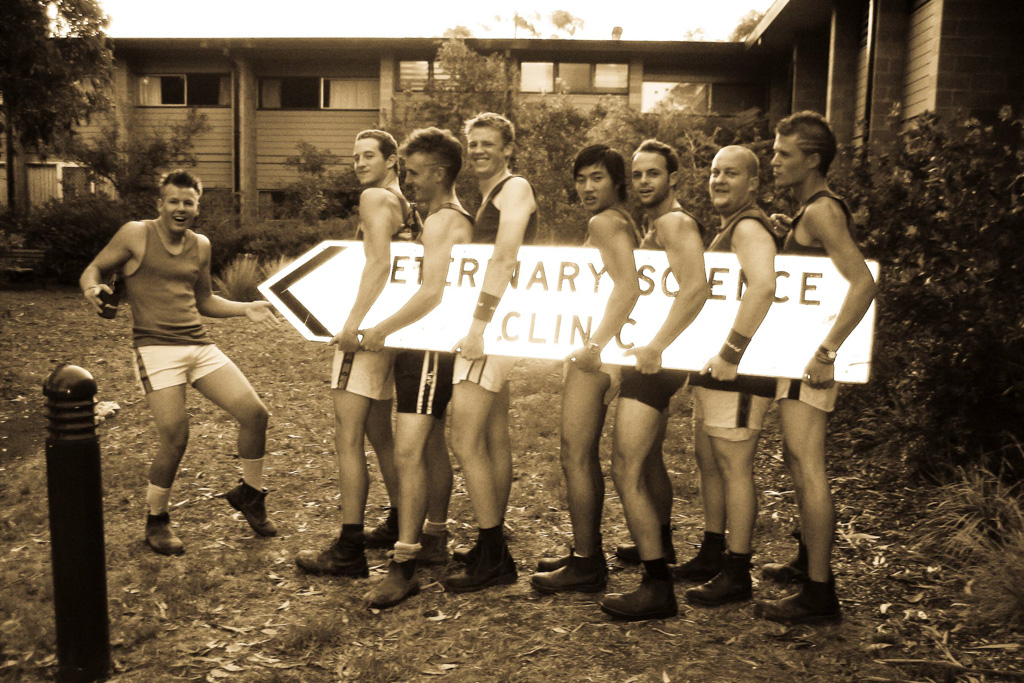 When the 2011 show was announced and fell during my Thailand holiday with Christina, I began to feel anxious that I would miss my chance. 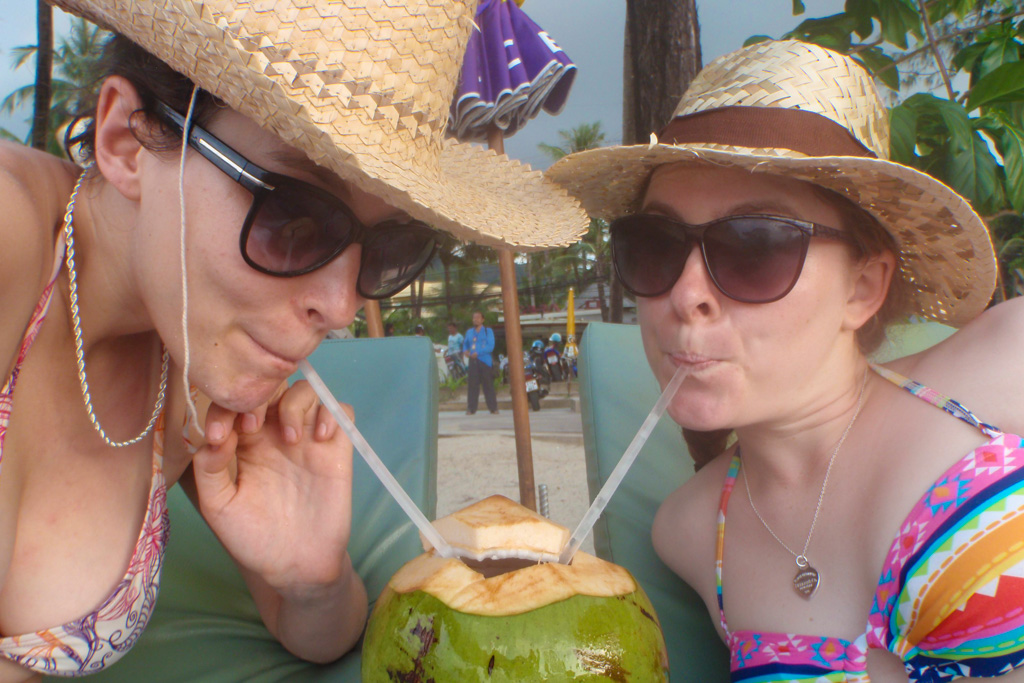 Then the 2015 tour came around, right when we had a holiday booked in Bali. It was distressing, but I figured I could push my flight back a couple of days, and go to the concert by myself if need be. But Elliot rejected that idea as vehemently as I’ve ever seen him reject anything, so that was the end of that. 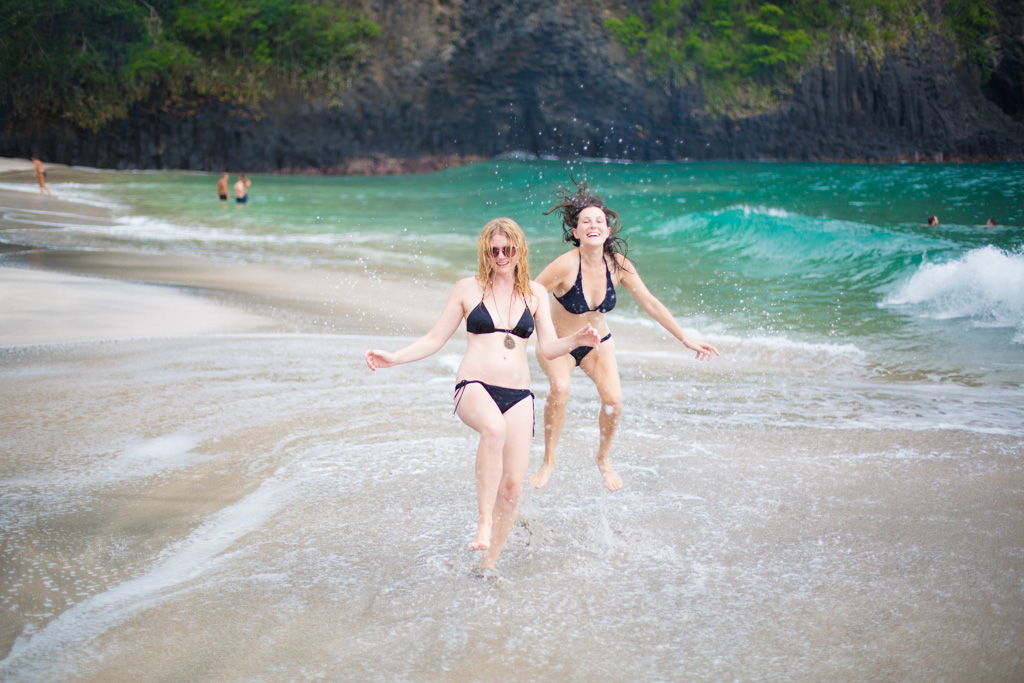 If Foo Fighters hadn’t announced an Australian tour by the time our big trip came around, we were ready to plan our travels around getting to a US concert. Thankfully, it never came to that. 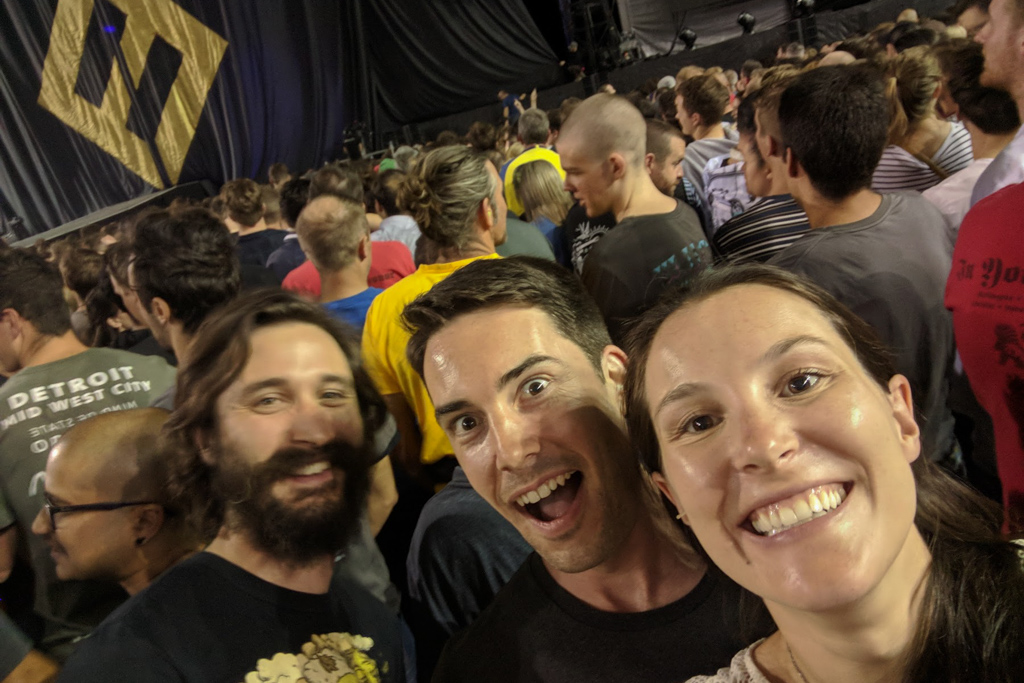 As Dave Grohl’s silhouette appeared behind a massive curtain bearing the Concrete and Gold logo, I involuntarily started doing jazz hands by my sides. ‘Run’ was an epic opener, followed up without pause by ‘All My Life’ (a personal favourite) and ‘Learn to Fly’. At this point Ed quite accurately noted, ‘They’re not fucking around!’ Sure enough, ‘The Pretender’ was next. 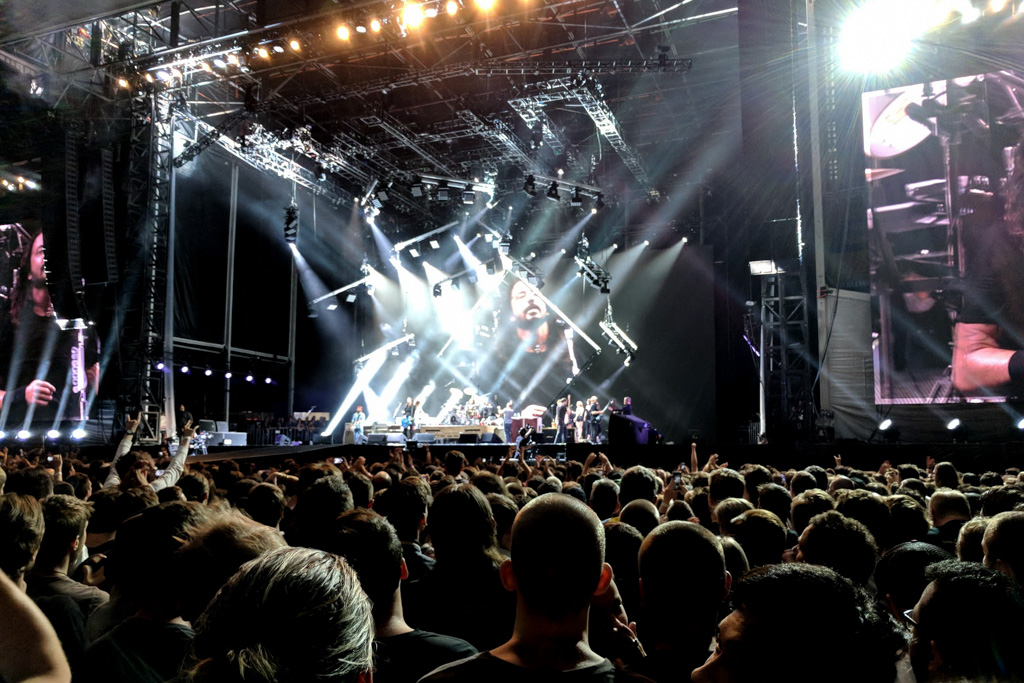 Backup singers joined the band for their latest single, ‘The Sky Is a Neighborhood’, against a vibrant blue background dotted with stars. 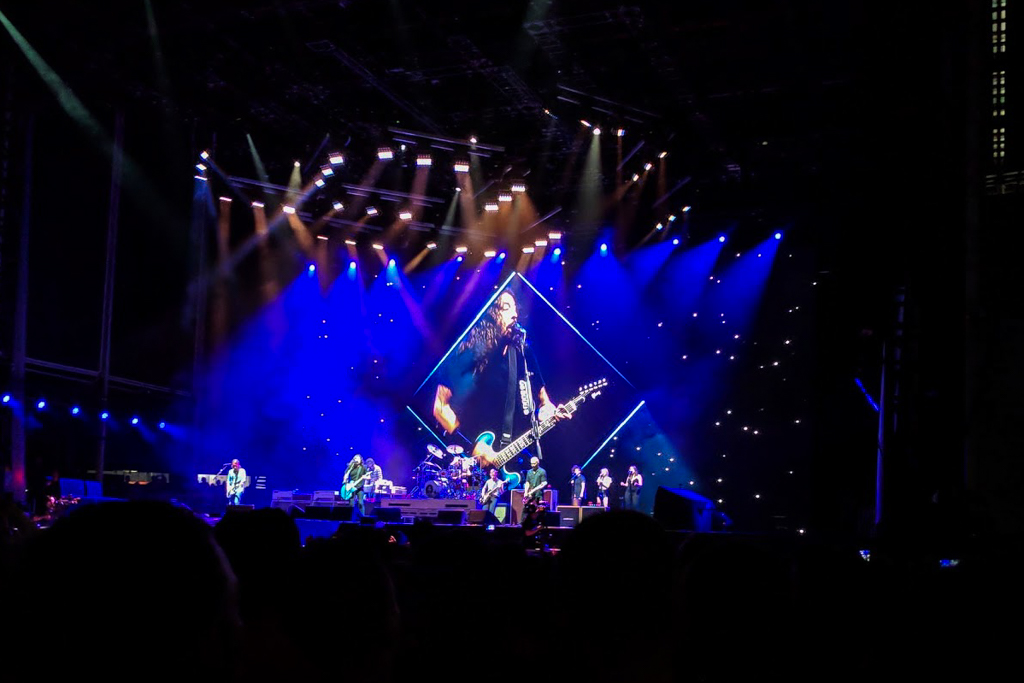 Halfway through ‘Rope’, Dave turned to face Taylor on drums and the two bounced riffs off each other for a good few minutes. But, not satisfied with that, as ‘Rope’ led into ‘Sunday Rain’, the entire drum kit rose up from the stage for an extended solo. It was about 20 minutes by the time the two of them were done proving, at ages 49 and 45, they’re still rocking as hard as they were 23 years ago. 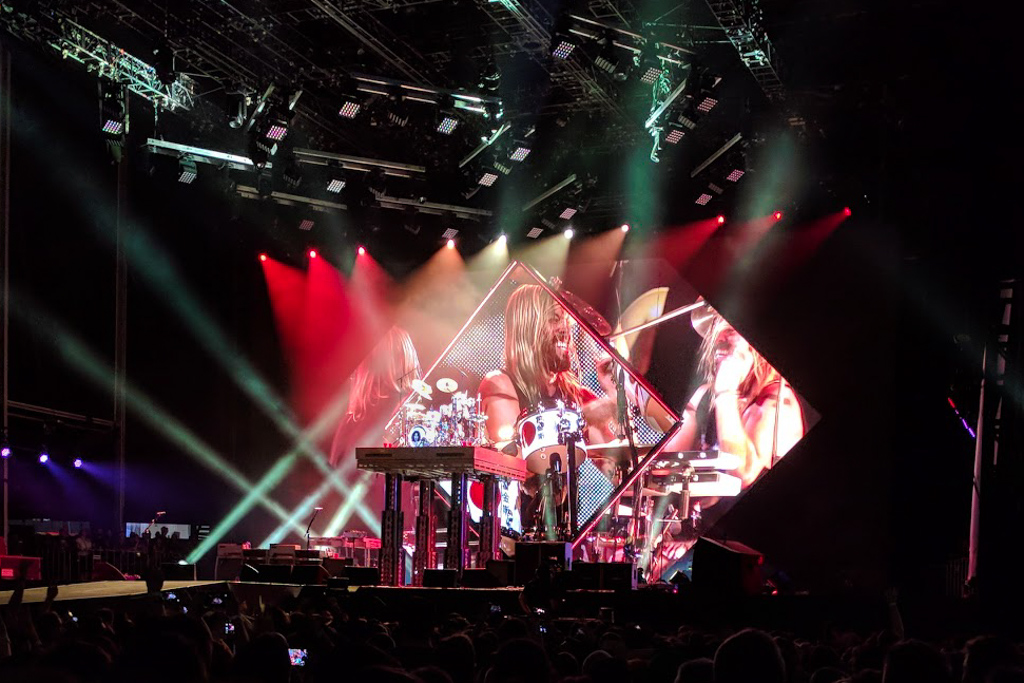 Finally, after about an hour, Grohl saw fit to say hello to the audience, apologising for how long it had taken. ‘Alright,’ he says, ‘how many of you have been to a Foo Fighters gig before?’ Ninety per cent of the crowd threw their hands in the air while I hung my head in shame. ‘And how many of you is this the first time?’ Without lifting my head, I rose my hand pitifully.

'Alright, for those of you who haven’t seen us before, let me tell you what I like to see at a concert. I love it when everyone sings along.’ He stuck his bum out to the side and aped Bruno Mars: ‘Lucky for you that’s what I like, that’s what I like’. What better song to follow than ‘My Hero’. A slow crescendo through the first couple of verses built up to the most satisfying ‘Kudos my hero!’ I’ve ever shouted.

Capitalising on the mood, 'These Days' and 'Walk' saw the crowd revel in yelling ‘Easy for you to say!’ and 'I never wanna die!' ‘Let It Die’ was dedicated to ‘the diehard Foo Fighters fans’.

‘Can we get the lights down?’ he now asked. As the stadium descended into darkness, he asked to see all our lights. I wasn’t even surprised to find the torch on my phone mysteriously out of order. Of course, as soon as we got out of the concert it worked again. But none of it mattered, because torch or no torch, it was time for another epic singalong. Lights twinkled throughout the stadium as the singalong went into overdrive with no other visuals to distract us. 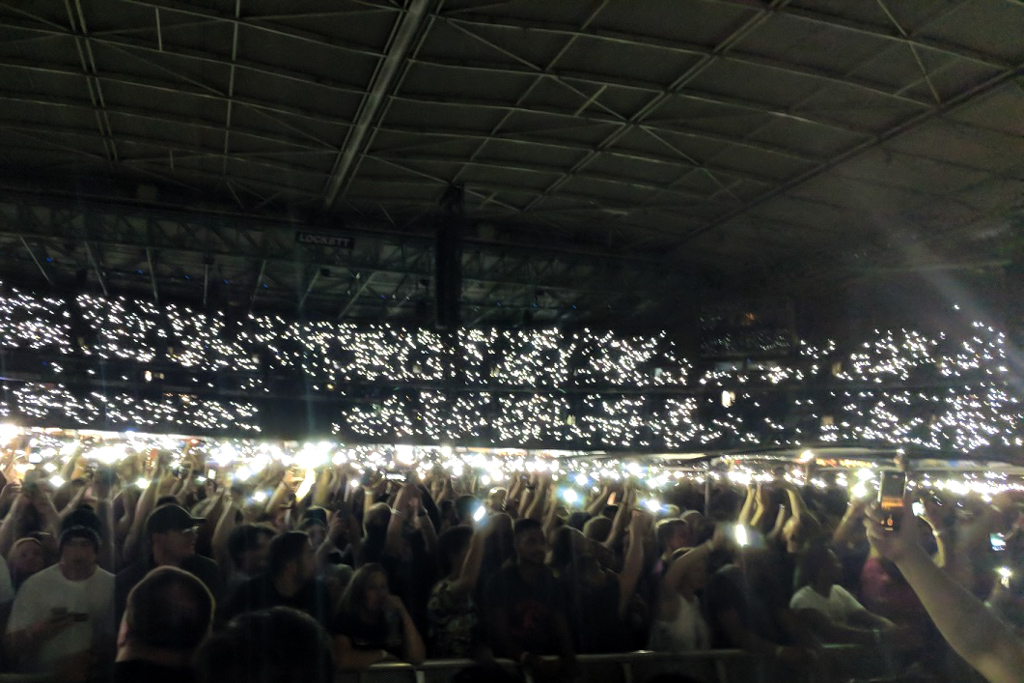 Time for some covers. Lead guitarist Chris Shiflett covered ‘Under My Wheels’ by Alice Cooper. On ‘Blitzkrieg Bop’ by the Ramones it was guitarist Pat Smear’s turn to shine. Then Dave demanded that Taylor 'Get your board shorts down here’ to sing. As he approached the front of the stage, he asked the crowd, ‘Now, trick question... if I’m singing, who’s on the drums?’ Taylor shone in his moment in the limelight, prancing up and down the extension platform doing his best Freddy Mercury with ‘Under Pressure’. 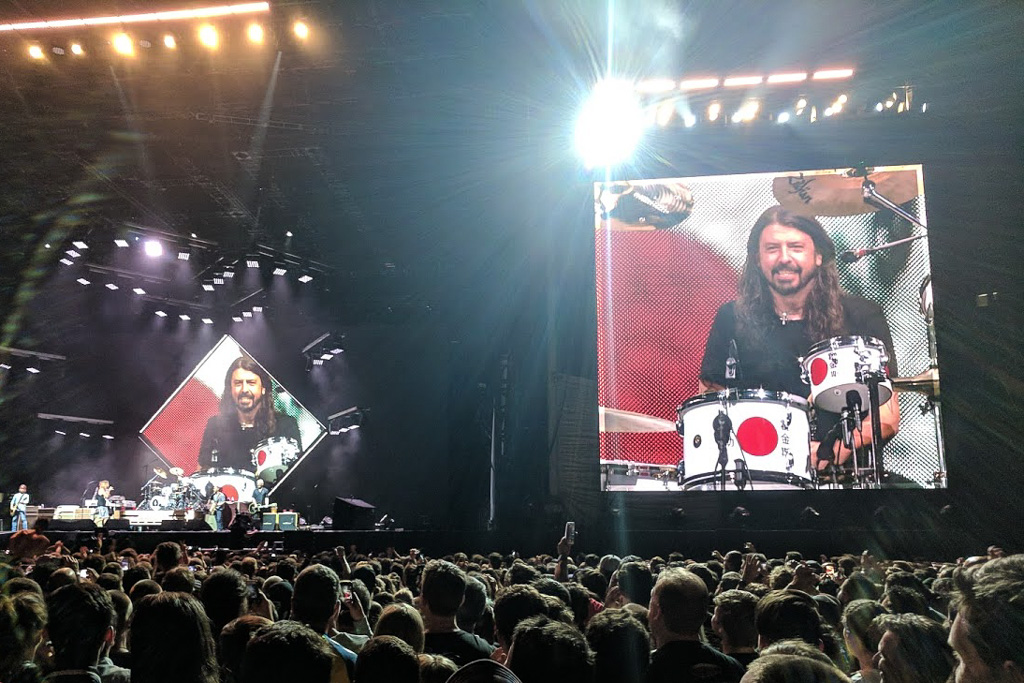 ‘Now this song is designed to chill you right down’ Dave said, with a mischievous glint in his eye. ‘Nah, I’m just fucking with ya’ he said and launched into ‘Monkey Wrench’, racing around the stage and throwing his head around with an infectious energy. 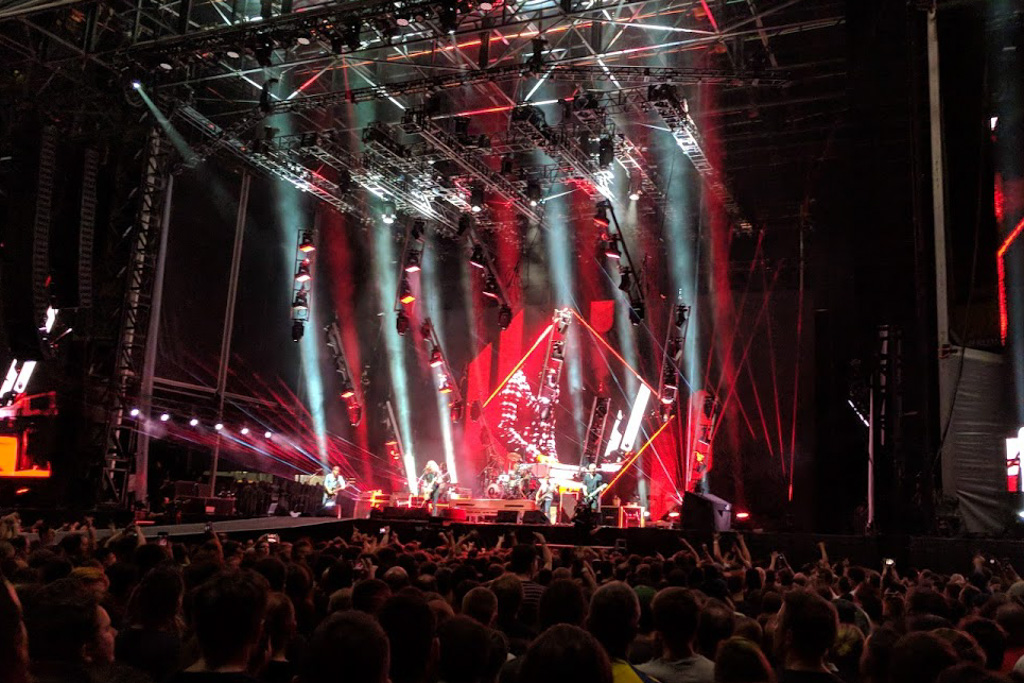 The next song, Dave announced, always reminds him of Australia: they made the video for it down here, in which the crowd throws a bunch of 'Footos' candy at the stage. He affectionately remembered how his mate Ross had warned him afterwards that every time they played this song people were going to throw those candies at them. He was right, and for a long time the band simply stopped playing it. But all credit to Ross, who had reminded him of that comment earlier in the day, and convinced Dave to play it. The song? 'Big Me'.

Now Dave called Weezer frontman Rivers Cuomo on stage. ‘Are you ready to rock?’ he demanded in a throaty yell. ‘I’m ready to rock’, Rivers responded with the perfect enunciation of rock's nerdiest frontman. 'Detroit Rock City' by KISS went down a treat. 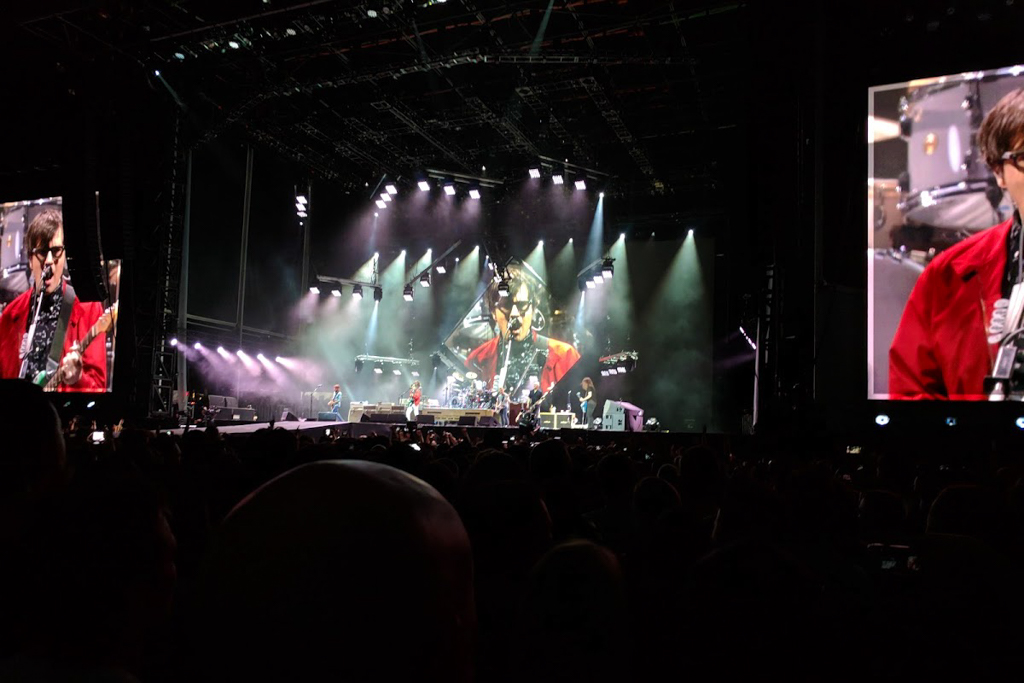 ‘I love this guy’ Dave proclaimed, before launching into 'Best of You' with a self-indulgent belch. It was the perfect song to end the pre-encore set, as no sooner had the band left the stage than the audience began again to sing the 'oh oh oh...' refrain.

It wasn't long before Dave and Taylor appeared on the big screens having a drink and looking out upon the audience from backstage. A back-and-forth negotiation began between Dave and the audience, as we bartered over how many songs the encore would entail via a show of fingers. Four was the consensus. 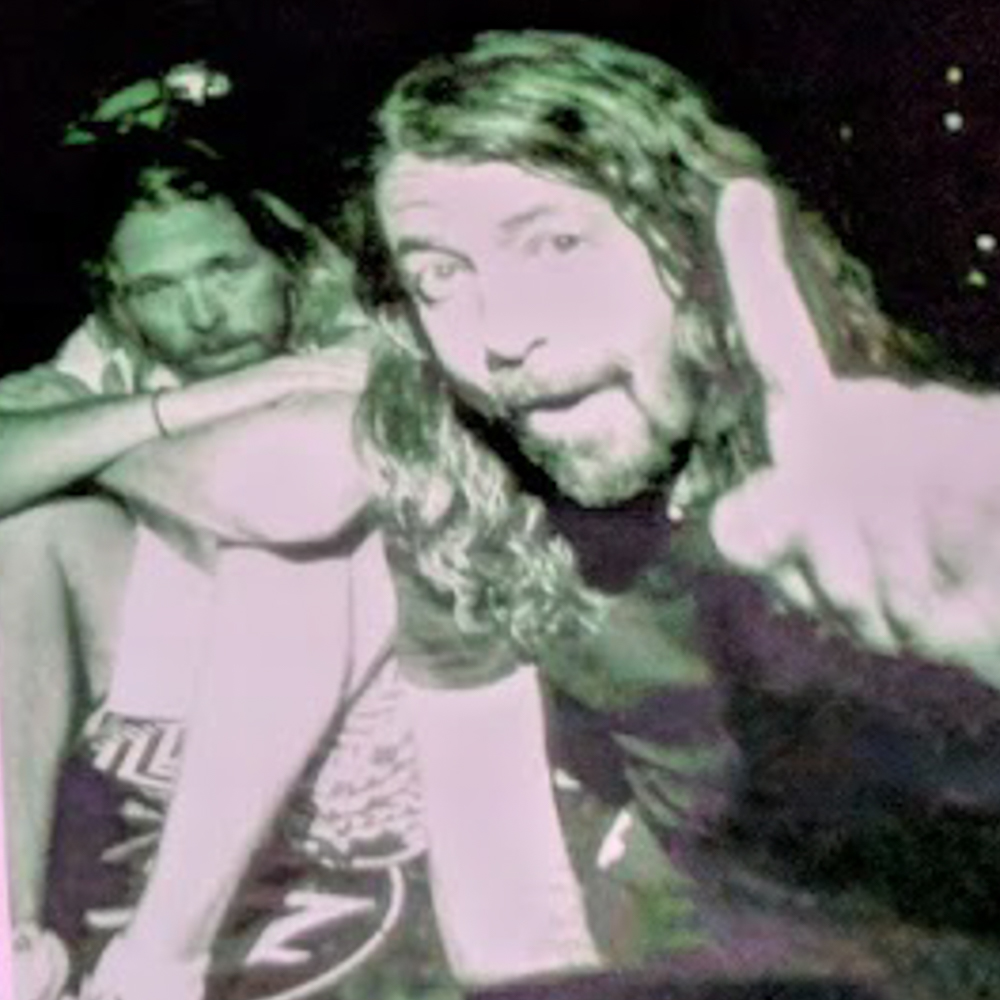 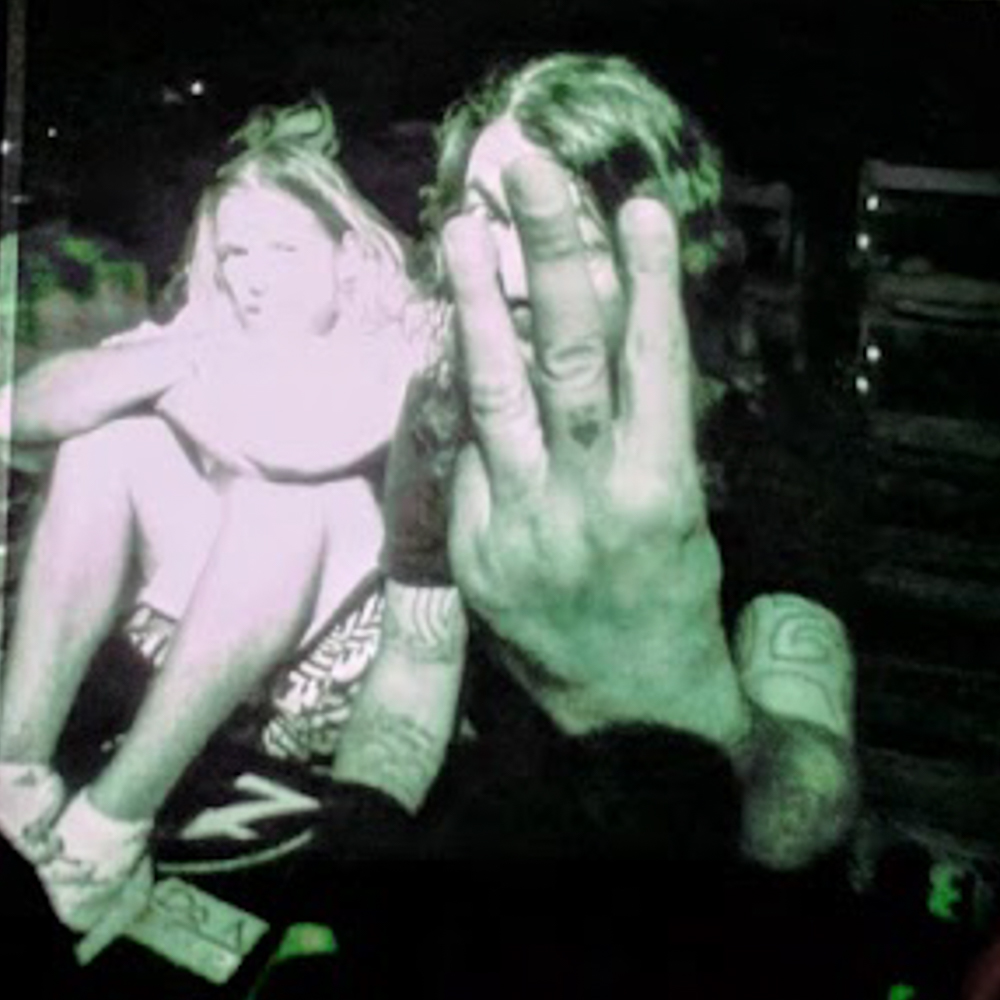 To kick off the encore, Dave returned to the stage alone and, from the very end of the extension platform of the stage, fondly recalled the email he had received after the Beaconsfield miners got trapped in 2006, telling him that while the rescue was being planned, all they asked to be sent down to them was water and an iPod with Foo Fighters on it. Although this was only to block out the sound of the drills, it stuck with him, and after the 2006 show at Sydney Opera House, he met up with one of them – and that's when he wrote this instrumental song. He promised he'd put it on the next record, then forgot, but managed to pull it together at the last moment just in time to include it on Echoes, Silence, Patience and Grace.

After a lovely acoustic version of 'Times Like These', Dave mentioned that during his appearance on 'a TV show, I don't even know what it was, but it was fun [it was The Project], there was this one person in the audience who just wouldn’t shut up, she just kept yelling out "Play All the Cows!"' So tonight, that's what he did, to the elation of the huge portion of the audience that still remember it like it was yesterday. The mood lifted even higher when, 'as long as we're doing old-school songs', they followed it up with 'This Is a Call'. 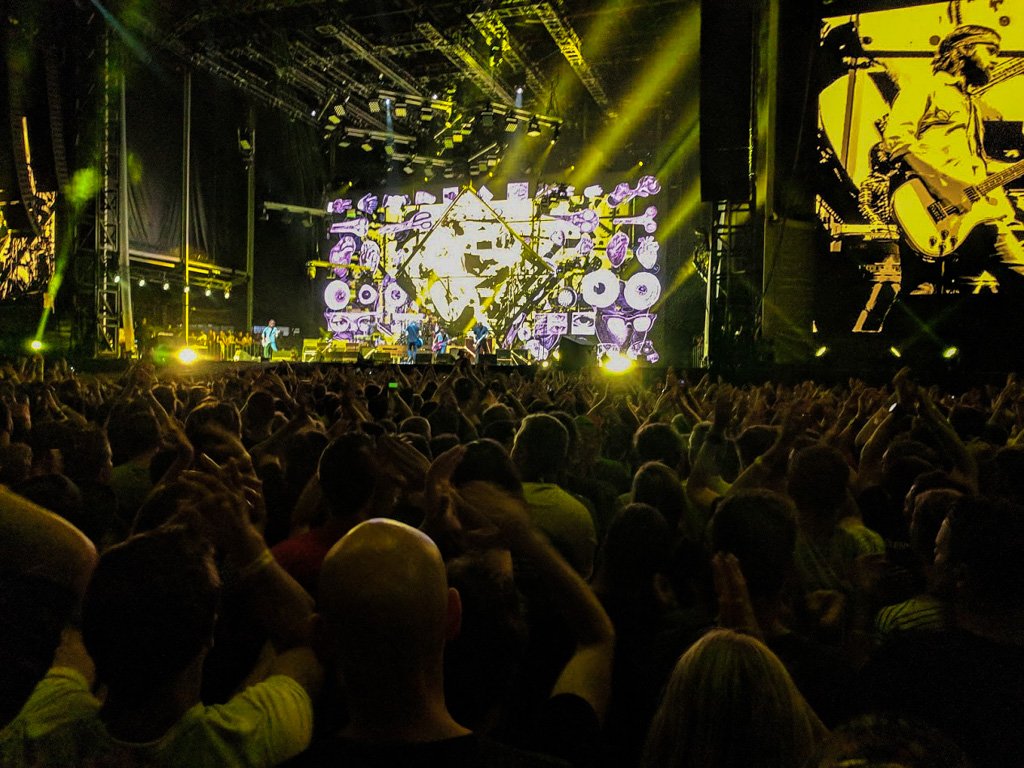 'You know how I said we'd do four more songs? I lied. I was fucking lying!' Dave announced irreverently. As if anyone believed the show was going to end without 'Everlong'. But first, a tribute to Malcolm Young with a spirited rendition of 'Let There Be Rock' by AC/DC.

And then, the moment I’d been waiting twelve years for. It was everything I hoped it would be.

‘And I wonder... if everything could ever feel this real forever. If anything will ever be this good again!’

It wouldn't, at least not for the rest of the night. We made our way to Southern Cross station, got on a train that said it was going to Sandringham, were delayed at Flinders Street for 20 minutes, then when we finally got going again found out that it had somehow turned into a Craigieburn train.

Now at Flagstaff, further from home than our starting point, we got in an Uber (playing KIIS FM – why do no Uber drivers have reasonable taste in music?) and had him drop us at Elsternwick Station to collect our car. But as I turned the key in the ignition, I heard the familiar 'tic-tic-tic' of a flat battery, and wished I hadn't turned on the overhead light to pluck an eyebrow hair on the way in.

And so we walked home, dejected. Kudos my hero to Elliot for not being (outwardly) mad at me.

This salad is a nice easy option that you can make in the afternoon and have ready to go as soon as you're hungry.

Foo Fighters
The Colour and the Shape 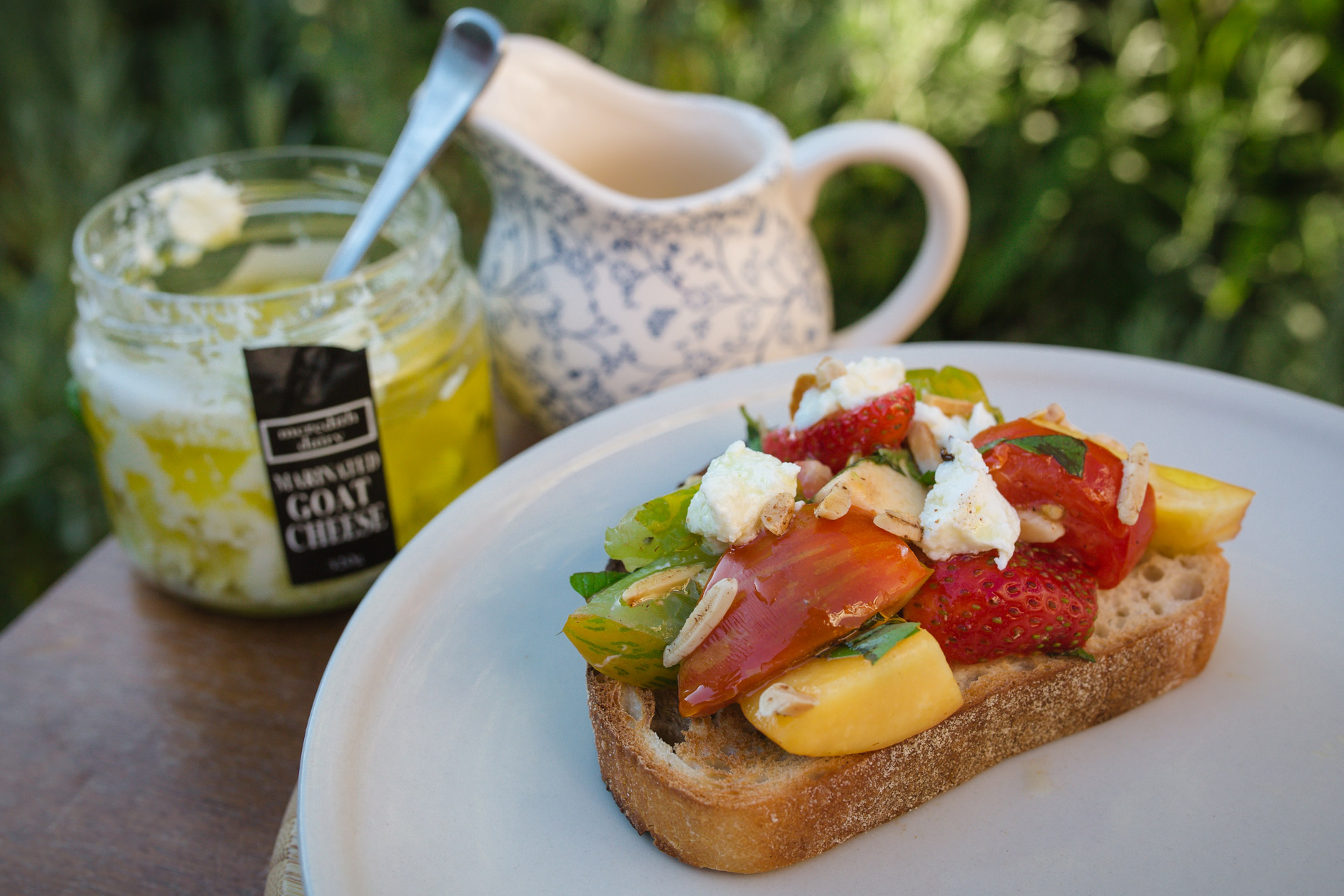 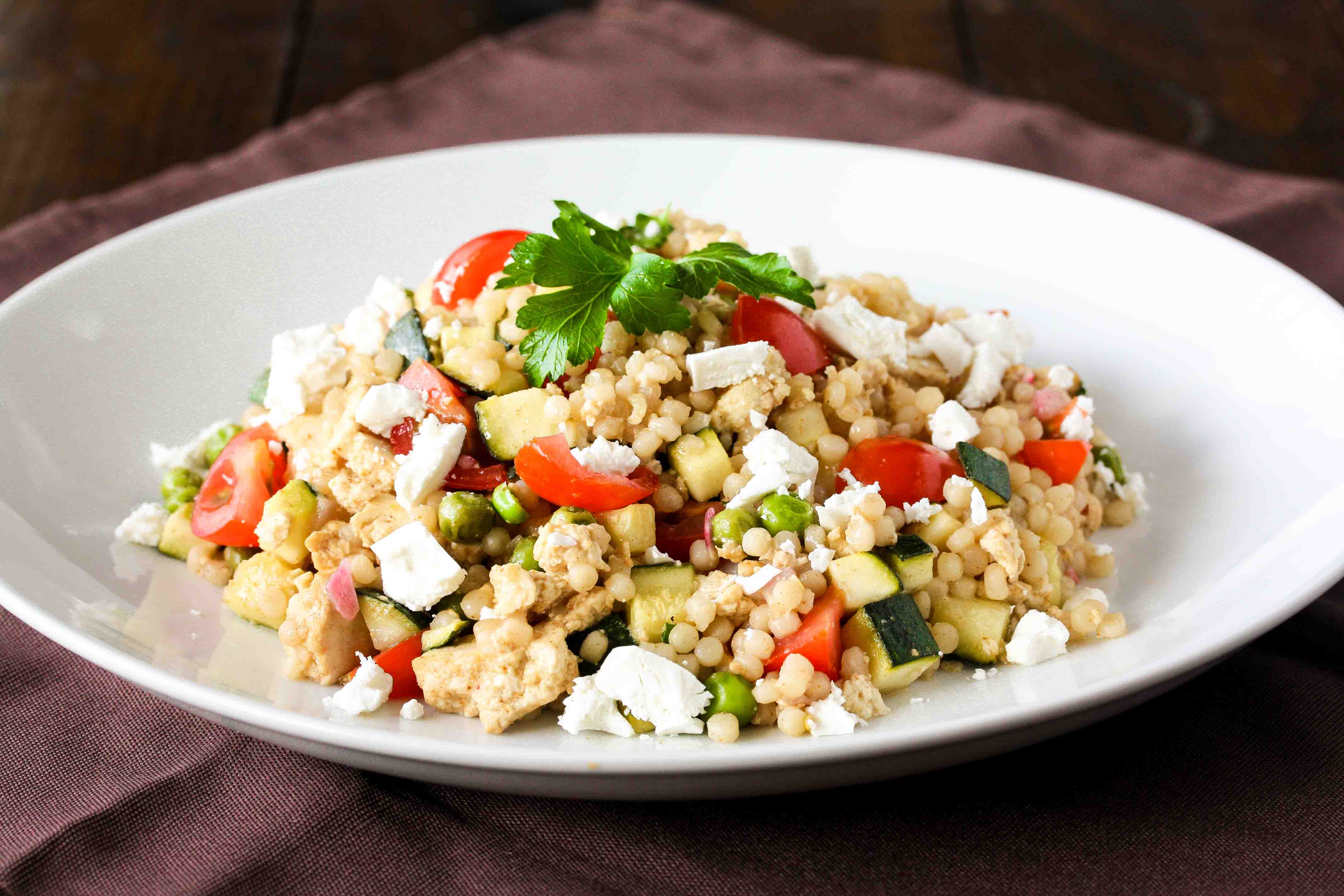